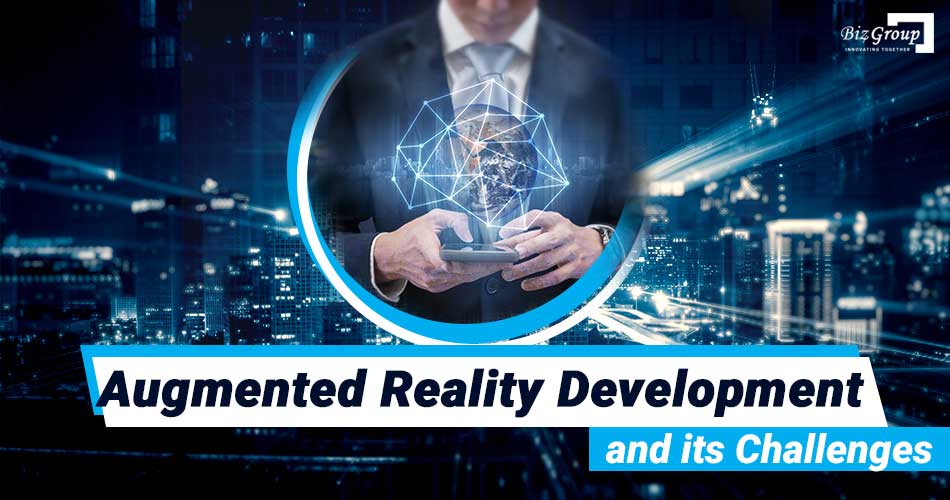 Augmented Reality Development and Its Challenges

Augmented Reality is not a new concept in information technology. But it has picked up certain hype in the last few years only. This is probably because of the proliferation smartphone market has seen in these years. And for any revolutionary technology to pick up pace and prove its worth, coming up on smartphone could be called its “prime time debut”. Now since the technical paradigm has shifted to mobile-first, Augmented Reality has also received its much-needed space. But still this industry has a lot of challenges to overcome. This article will explore those challenges and talk about the future of this industry.

It’s been three decades since the term “Augmented Reality” was first coined. For several years, this technology struggled to make its identity known to everyone. It was always loosely misinterpreted with Virtual Reality that is similar to AR but actually very much different. In fact, AR is the mixed form of or a junction between physical reality and virtual reality, hence called “Augmented” Reality and sometimes even called mixed reality (which is also different).

Ever since, the distinction between AR and VR became clearer, tech giants, startups and even individuals started taking more and more interest in it. This paved a way for developers to work on this technology and it sprang new and innovative ideas from everywhere around the world.

Lack of a proven business model

Since Augmented Reality is a relatively newer technology, the maximum time the industry has seen consists of research, innovation and development. What it lacks is a solid business model for it to perform so that more and more companies could come up with their products. This goes in line with the lack of a consumer mindset needed for the market performance of a service or product as it hasn’t yet entered the daily lifestyle of end users or mass consumers.

A recent breakthrough though came in the form of mobile game called Pokémon GO developed by Niantic Corp. The hype this game saw around the globe, made the Pokémon fans go wild with excitement and other game companies frantic for a while. But this overnight success didn’t fare too well for them as well. As people started losing interest, Pokémon GO became just another game, you would play for a while and drop. But in pulling all this off, this game gave a blessing to this industry, now the reach of AR expanded and its popularity increased multifold.

The advancement of technology brought with itself substantial increase in the risks and points of potential failure. When everyone is connected through internet, the security concerns for any product or service becomes topmost priority and should not be ignored at any cost. As Augmented Reality incorporates the use of camera and various sensors, it becomes a vulnerable portal for hackers and schemers to take its advantage for their own benefit or for disrupting peace.

The solution for this is to create a regulation standard for security which serves as a test and requirement for developers and tech firms. It should be something from which the developers can draw the protocols for making an application secure.

To make Augmented Reality actually work, you obviously need a hardware device. This device can either be a full-fledged or customized AR device, like some headset or it can be something that most of us have – a smartphone. Now, it is most likely that you would not invest in a high-end device but use something that’s already in your hand.

The problem lies here is that making something usable and the experience great for everyone, there should be a uniformity in the devices that are going to use it. And this is something known that smartphone’s different makes and OS versions have always been a problematic state of affairs when it comes to technology updates and compatibility.

Nevertheless, some efforts have been made to counter this issue. Like a recent ongoing development by Google in the form of a web component called model-viewer. This gives you the ability to engage in an augmented reality experience with your smartphone. One of our prominent projects Nvzn Augmented Reality is based on the same model-viewer for an augmented reality experience that requires no app. You can check this cool web application out (https://pp.nvzn.net) which lets you publish 3D models and view them in AR.

This is somewhat an extension of the third point and the reason for it is also the same. As this technology is relatively new, there is still a lot of work to be done in this field. The lack of technical standards for hardware and software is there which has let the developers – on one hand think and work freely without any bounds and on other hand has proved it to be a wild run without any rules. If we want to achieve a true sense of unified solution and greater reach, there has to be some sort of standard technical protocol for everyone out there to work with.

Nevertheless, in due time it is considered that such standards will come out and it will only lead to the fact that this is getting recognized around the world.

Augmented Reality has seen its rise these past few years. But whatever we as general consumers have seen or known about this technology, it is mostly for entertainment or a bit for eCommerce. We have hardly seen other important use cases that could stronghold its presence and ensure its longevity. As was evident in the case of Pokémon GO, when excitement died out, the mobile game lost its charm. For Augmented Reality to grow and retain its consumption in the market, development companies must come up with content and use cases of AR that are not ephemeral but suited for a long time. And we know, AR has this potential.

In the end, it all comes down to just one thing – how do you want people to perceive a technology. Is it something that is fun but is of hardly any use or is it something that engages people in a way that they can experience fun and utility at the same time? It is on the developers to find innovative implementations of this technology so it could have its name everywhere and is also helping people lead a better life.