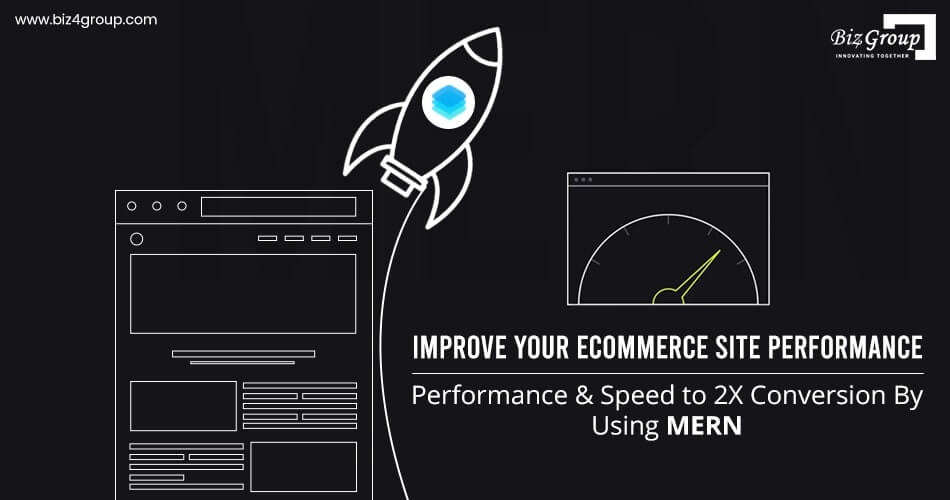 MERN stack has gradually become the preferred combination of technologies and platforms to develop top-quality web applications across the development sphere. From excellent frameworks to libraries and a robust database, MERN stack has got all that is needed.

It is essentially a JavaScript stack which largely simplifies the development process and delivers high-end performance even during usage spikes. The stack carries an array of open-source components, namely MongoDB, Express, React, and Node.js. All of these technologies combinedly deliver end-to-end framework support which greatly benefits modern-day eCommerce platform development.

Most developers today choose MERN stack over popular eCommerce development platforms as it covers all the necessary determinants, be it front-end, back-end, or testing. The development process is highly simplified with MERN and the reiterative tasks are nearly knocked-off the product development lifecycle. Development teams also get hold of a robust set of in-built testing tools to further ensure that the end result is competent enough to handle on-demand platform scaling.

Business-owners need to make sure that their online marketplaces can handle user queries during peak season sales and also scale down on demand to save critical resources. Being one of the leading eCommerce development companies, we take advantage of the MERN development stack to deliver performance-oriented eCommerce solutions to our variegated clients across the globe. With MERN, the benefits are not just limited to simplified development. Improved performance and speed are two of the main differentiators that make MERN the preferred choice for eCommerce websites.

React, which is also the main element that sets MERN and MEAN apart, is actually a library that helps create intuitive user interfaces for your eCommerce platform. During the development process, the React library offers useful tools that allow developers to define library functions and create best-suited applications.

React’s core strength lies in its capability to break the user interface into independent segments. These segments can then be reused for easy integration during the development process. The React component also plays an important role in improving the performance of your eCommerce application. In simple words, a React component is a JavaScript class or function that describes how a particular module of the UI would appear. The component not only maintains its states but also renders itself. Each component uses call-backs to set up communication with other sub-components and share their state information.

The use of parent and child components to render an interactive UI offers a performance lead to your eCommerce platform which would have been quite a weighty task with Angular (framework) or any other eCommerce builder tool. Also, React is an isomorphic language, meaning it can deliver smooth rendering of pages on both the server and client-side (browser).

Apart from React, the MERN stack comprises Node.js which is one of the most popular JavaScript environments generally used to develop high-performing and scalable web applications. In the eCommerce domain, Node.js is advancing as a highly productive and reliable platform to deliver blazing-fast web-experience. At Biz4Group, our developers utilize the MERN stack to develop extremely scalable and feature-rich eCommerce platforms for various business verticals.

All said and done, as a business-owner one may still be curious about what makes Node.js so efficient and quick.

The secret lies in its compilation approach as Node.js enables faster platform operations with its asynchronous compilation. Unlike AOT compilation in Angular, the complete JS program is compiled at once thereby reducing the dependencies and tardy execution. Based on Google Chrome’s V8 JavaScript engine, Node.js comes across as a non-blocking I/O asynchronous language which can readily execute the code without much delay. It is both asynchronous and event-driven making it a really powerful JavaScript runtime environment. The use of NoSQL databases like MongoDB further enhances the speed and performance of your eCommerce platform.

Advantages of the MERN stack for eCommerce

For a successful eCommerce platform deployment, developers at Biz4Group recommend the implementation of MERN stack due to its unmatched performance and speed benefits. This particular technology stack allows your platform to deliver an optimized user experience that can be upgraded periodically to ensure a competitive lead across the targeted domain.

eCommerce development is remarkably effective using the MERN stack due to its adeptness across both front and back end functionality. While critical elements like user queries, logistics, payment gateways, supplier management, content management, etc. can easily hold back even the most resilient platforms, these features hardly put any cramp on the overall performance of the eCommerce platform.

With a successful track record of delivering 65+ eCommerce solutions across various verticals, Biz4Group has emerged as the preferred choice for online shopping platforms. Our seasoned team of developers understands the unpredictability of modern-day eCommerce customers and therefore develops the platform to meet the requirements accordingly. With MERN stack backing the development process, your business solution can easily deliver the customer expectations, be it during season sale or at regular hours. The unison of MongoDB, Express.js, React.js, and Node.js helps us deliver a platform that carries a competitive edge over many popular site building tools and platforms.