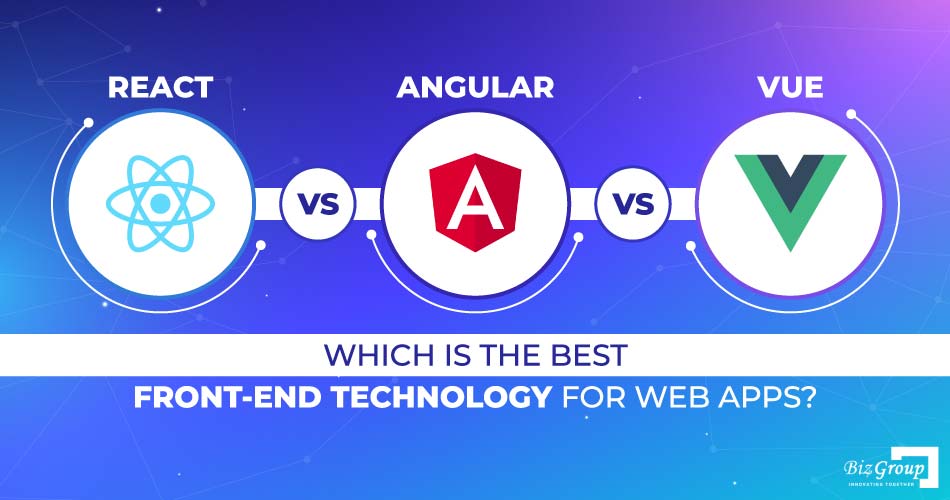 React vs Angular vs Vue- Which is the Best Front-End Technology for Web Apps?

The front-end framework used in developing a web app affects almost everything in the website: its speed, cost of development, compatibility with other technologies, performance, and much more. Though the front-end code can be written in any programming language, the code will eventually be converted into JavaScript as browsers only execute JS.

This article will give you an overview of the most powerful Javascript front-end frameworks and help you choose the right technology for your project needs.

The Angular framework belongs to the MEAN stack, which is the hottest technology stack for building high-performance websites. Angular is composed of modules, services and components. Every component has a Class or a Template that defines the application logic and Metadata (also known as decorators) that guide where the building blocks are present to create and present the project.

The templates in Angular are written in HTML and may include special directives to output reactive data and render multiple elements. Components use services for delegating business-logic tasks (for example: fetching data or validating input). This framework is based on TypeScript and is mainly used for building single-page web applications (SPAs).

This open-source, front-end library is primarily used for developing user interfaces since it introduces a flexible front-end solution without having to enforce a specific project structure. A few code lines are all that's needed to get started with React, and hence it is comparatively a simpler language to learn and implement.

React is based on JavaScript and can be combined with JavaScript XML to create elements containing HTML and JavaScript at the same time. React components are independent and reusable pieces that can be used throughout the web application.

Vue is an open-source Model-View-View-Model (MVVM) front-end JS library used to develop user interfaces and Single Page Applications (SPAs). When used with other tools to create a dynamic UI, Vue shows versatility, high performance and provides an optimal user experience on a web application. The ViewModel layer in Vue is used to make sure that the application data is processed to allow the framework to render an up-to-date view. Vue's syntax combines recognizable HTML with special directives and features that enable a developer to create View components that are reusable, self-contained and small.

Additionally, the Single File Components with the extension .Vue comprise of HTML, JavaScript, and CSS so that all the necessary codes stay in one file at a single location to organize the code. To transpile SFCs into working JavaScript code, add on tools are needed (For example, Webpack or Browserify)

The three factors that are necessary for distinguishing these JavaScript frameworks include:

Startup time: : The framework that will provide a faster initial load time is especially useful for applications that require more speed.

Memory allocation: : The framework that operates better with the allocated memory while performing bulk operations such as reading or writing thousands of records from the database.

Let's give you a snapshot of the factors that distinguish Angular, React and Vue.

In a survey conducted by Stackoverflow , React stands in the topmost position of most loved and wanted frameworks by developers. React is followed by Vue, and lastly, Angular. While developing a web app, it is best advisable to choose a front-end platform only after considering all the advantages and downsides of the three frameworks.

Wish to have an amazing web application that is designed and custom-developed just for your business? Biz4Group is your ideal technology partner for all the custom app development needs. We have a proven track record in delivering performance-oriented web and mobile apps with top-notch quality deliverables. Get in touch with our experts to book a free consultation session today!!