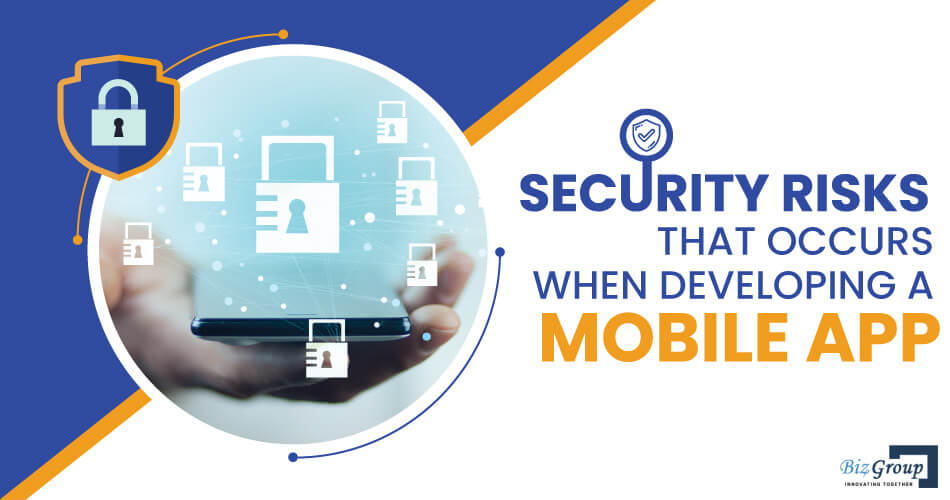 Security Risks that Occur when Developing a Mobile App

“75 percent of mobile security breaches will be the result of mobile application misconfigurations, rather than the outcome of deeply technical attacks on mobile devices.”
-Gartner

Mobile apps are popular amongst users due to its practical functionality and user convenience. Several technological advancements in the past few years have boosted its serviceability by several notches. Right from social interactions, fitness, entertainment, transactions to even running a business; mobile apps have revolutionized, both, the way companies conduct their business and also the way end-users lead their lives.

With the pandemic persisting and global businesses now running on the "work from home" model, employees are using popular apps like Zoom, Google meets, Google Suite to connect and get work done. There is no better time than this for app developers to ensure that apps are developed with the highest security standards. The data residing within the mobile app can be at risk of exploitation if proper security controls are not applied while developing the application. Depending on why the app is used, there can be sensitive data like payment information, customer addresses, bank account information, personal numbers etc.

A Forbes article mentions research conducted by Comparitech , that analyzed a sample of 515,735 Android apps from the Google Play store. Their analysis concluded that 4,282 of the apps were leaking sensitive information, including more than 7 million email addresses and chat messages, 4.4 million usernames, 1 million passwords and 5 million telephone numbers. Hackers can easily gain access to this consumer personal information and details and maliciously use it. Companies and developers need to be proactive in dealing with Security issues early in the Mobile App Development stage. Mobile app security needs to be a part of user stories right from the date of the project kick-off.

Here’s what Dionisio Zumerle, research director at Gartner, had to say- “The mobile environment is evolving and presents new vulnerabilities and threats. App developers lack mobile expertise and tend to apply traditional application development practices to mobile with a focus on functionality, not security.” Some common security risks that may occur during mobile app development phase are-

#1 Encryption not being Followed

Not using good protocols such as AES and SHA256 can pose as a risk while the app transmits data. Any malicious actor can hack the data transmission and misuse the data being transferred. Additionally, encryption keys should not be stored on the local device.

Granted, most of the code used for developing an application can be open sourced to help with deployment and development speed. However, third-party codes should be sourced from trusted libraries to avoid having a hacker build a back-door and remotely steal information, and even crash the system! Additionally, open-source apps can be reverse-engineered, leaving the source code exposed and putting your app at risk.

Apart from programming a multi-factor authentication mechanism, getting alerts when your code is being modified, maintaining a log of code changes of the mobile app and programming triggers to alert for intruders can add an extra layer of security to your app development/ security patch cycle.

Since mobile apps can accept data from various sources, the absence of a proper encryption mechanism gives attackers access to cookies, environment variables and other valuable information that can be easily exploited. Mobile apps should store critical information such as passwords and credit card numbers in an encrypted manner and not directly on the device. Take the instance of when the popular Starbucks app was hacked and hundreds of customer's sensitive data was exposed, and finances misused. This app was used by customers to pay for their orders, avail special offers, and much more. The app had stored critical user information- like passwords, payment information, profile related information- in plain text format.

Try to build a hard code and follow an agile development mechanism so that security patches can be easily applied to the code on a timeline basis. Similarly, the back end code that runs on your server and contains the database for the app should also impose security controls to ensure that data isn't exposed. Firewalls and authentication requirements should be incorporated to protect users from unauthorized access.

Test, test, test! Not just during the development phase but even during the release of security patches. Keep abreast of current happenings in the cybersecurity world, and implement security patches and protocols way before there is a chance of compromising the app. Forbes says that stronger mobile application security can benefit the business by “driving revenue growth and customer retention and protecting against today’s threats and future ones.” Biz4Group's expert team offers best mobile app development services that help improve the user's interaction with your business app. An excellent interface and simplistic navigation help in sales conversion, thus inciting better revenue and profit streams.