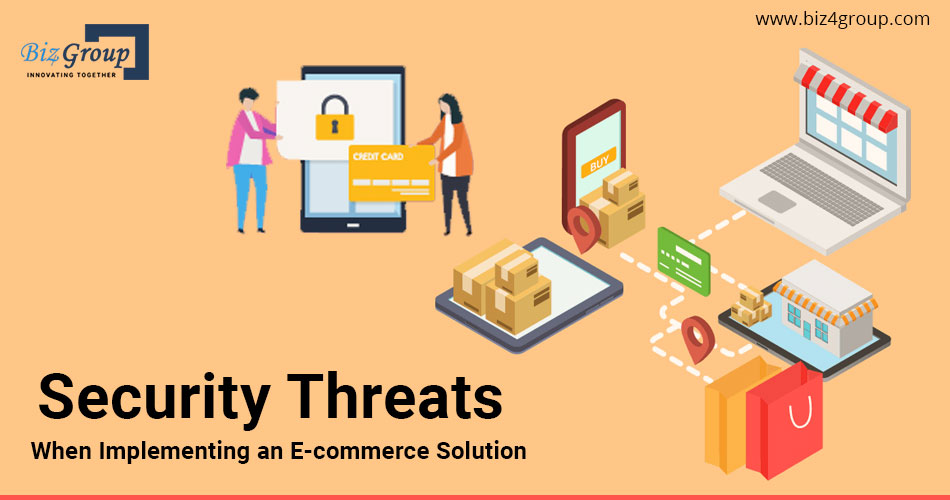 With the internet boom, everything and everyone have come closer. The virtual space has eliminated distances between people and businesses. From communication to business trades internet has made everything easier. Especially for eCommerce businesses, internet has proven to be an extraordinary medium to reach customers from the farthest corners of the world. However, this also means that eCommerce businesses are the most prone to security threats.

Needless to say, all that cash flow attracts cyber criminals from everywhere. This article is focused on identifying such threats that can put eCommerce websites at high risk:

As per reports, 2016 suffered from $6.7 billion of losses due to credit card frauds. Credit card chargeback are rising at a rate of 20% every year which is an alarming number. Credit card frauds are the most common type of fraud that target eCommerce retailers from around the world. A very common example is that of fraudulent websites that tempt users into providing their card information. Then the identity thief uses the provided card information to make fraudulent purchases.

eCommerce is a common prey as fraudsters borrow the identity of eCommerce sites to seduce the user into following the link and providing their credit card details. From there on, it’s a ride downhill.

Spam and phishing go together. Spams can be described as unsolicited mails that replicate the identity of popular social networks or other seemingly reliable sources to direct the recipient into following a link that further leads into phishing. Phishing being the effort to lure users into visiting links that ask for user information to further exploit that information for fraudulent practices.

According to sources, spam account for 90% of the total number of emails generated which is a highly alarming number. eCommerce sites are greatly used for the purpose of phishing which not only robs the recipient but also establishes the eCommerce company as a high-risk client.

Distributed Denial of Service (DDoS) attacks are very common and one of the most disruptive types of attacks that aim at flooding the victim’s servers in an attempt to prevent users from entering the network. Since, DDoS attacks are generated from different sources, it becomes extremely difficult to cease the attack by blocking one source. Popular eCommerce websites with big server networks are an easy target for these attacks.

A cryptanalytic attack, Brute Force attacks refer to attacks where the attacker submits numerous passwords in order to decipher the correct one. eCommerce website users fall prey easily to these attacks as there is not much awareness regarding these.

To secure users from Brute Force attacks, it is primal to educate your users to keep strong and longer passwords as it makes them more difficult to decrypt.

A code injection technique to take takeover the host database server, SQL injection attacks can allow attackers to clone host’s identity, disclose data, destroy it or even make it unavailable. eCommerce websites are one of the major victims of these attacks. As per reports, web applications are a common receiver of these SQL injections at an average of 4 attacks every month while eCommerce retailers average at twice the number every month.

Trojan Horses are popular as one of the most malicious viruses that can take over the whole system through an innocent looking email or download attachment. Trojan Horse is easily one of the most dangerous threats to eCommerce. A Trojan Horse attacker can easily get into a system and initiate order that eCommerce servers cannot detect as fake or real. Data encryption proves to be a futile effort once the malware has taken over a system as the data is visible before the encryption can even take place.

It is not difficult to understand that eCommerce is an easy target of most cybercriminals for the highly prized personal data of zillions of users that can be used to commit numerous cyber-crimes. While there is enough discussion taking place on the possible threats and how the security of millions is compromised on the platform, there are many potholes that need to be identified still. The best way to prevent such attacks is to create as much awareness as possible.

To fight unwelcome threats, it is of paramount importance to equip your business with highest quality security solutions. These security solutions are what enhance the website’s credibility and even ranking in a search engine. Furthermore, it also helps build an online retailer’s reputation in the virtual space.